When only the best is good enough

There can hardly be a single rifle hunter with even just the slightest interest in “the dark continent” who won’t nod in recognition at the mention of such legendary place names as the Serengeti, Selous, Masailand and Kilimanjaro.

There is also a very good reason for this as Tanzania is regarded as the finest big game destination in Africa amongst international big game hunters - a position the county has laid claim to for more than three decades. Tanzania is the biggest country in East Africa, the hunting districts amongst the best in Africa and the game populations are very well cared for. The country has set-aside one quarter of its total land as wildlife habitat, a strict game management program is carried out and constant efforts are made to control poaching.

Tanzania, the largest of the East African countries is an amazing safari destination. Huge tracks of land have been set aside to for conservation purposes in terms of national parks, game reserves and controlled areas. From extremely huge Game reserves like Selous to the world-renowned Serengeti National Park to tiny little Parks e.g Gombe stream, Tanzania has it all. Besides the wildlife parks, Tanzania also boasts of Mount Kilimanjaro, Africa’s highest Mt, the fifth highest Mt Mount Meru. Its also shares large portions of Lakes Victoria to the North, Lake Tanganyika and Lake Nyasa to the West which are all the three largest freshwater bodies in Africa.

Tanzania also has one of the longest coastlines in Africa with pristine white sandy beaches. Zanzibar or the ‘spice island’ Pemba and Mafia are all magical Islands on the vast Indian Ocean offering grear beach and historical experiences. The United Republic of Tanzania was formed out of two sovereign states: Tanganyika and Zanizibar. Tanzania is situated in Eastern Africa bordering the Indian Ocean between Kenya and Mozambique. A country vast and varied, it encompasses 945,087 square kilometers including the islands of Zanzibar, Pemba and Mafia.

It boasts some of the finest wildlife sanctuaries in the world. Serengeti, Ngorongoro, Tarangire, Lake Manyara, Mount Kilimanjaro, Mikumi, Ruaha and the Selous.

The country has a population of approximately 38 million, taking in African, Asian, Arab and European cultures, Muslim, Christian and indigenous beliefs. There are more than 120 tribes and over 100 different dialects spoken in Tanzania, but all tribes speak Kiswahili. The main languages spoken are Kiswahili and English.

One of the best preserved and most productive hunting concessions in Western Tanzania, protected by both its remoteness from civilization and the efforts of a conservation minded outfitter who never over exploited the area....

This concession is one of Tanzania’s greatest hunting areas. The combination of an excellent hunt for a wide diversity of Masai species set in a stunning landscape makes this hunting concession an absolute gem... 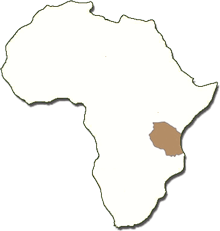